SAP Analytics Cloud Application Design is expected to be available somewhere at the beginning of 2019, so let’s already have a look at some tips to get you started with this first release.

In case you haven’t heard about Application Design, this is a brand new solution within the SAP Analytics Cloud, which allows you to build your own applications. It makes use of the components that we already know from the BI, Planning and Predictive areas in SAP Analytics Cloud, but lets you use scripts to extend these capabilities. It is basically SAP Lumira Designer in the cloud.

For those familiar with SAP Lumira Designer this one won’t come as a surprise. Also in SAC Application Design you can (and should) use the content assistent (CTRL + SPACE) to help you write scripts. It is fast and prevents mistakes. Just hit CTRL + SPACE and you’ll get a list of possible options.

You can find the SAP Analytics Cloud Application Design API Reference with all options here. Note that – just as in SAP Lumira Designer – you can also use “this“, instead of the name of the object that you are adding a script to. This is fast and flexible, as you can easily reuse the same code without having to adjust the name of the widgets. “me” doesn’t work by the way.

With console.log(); you can pass values to the console of the web browser. You can use this to debug your application and see what is happening with your code.

The built-in Info Panel contains two tabs: Errors and Reference List. The Errors will show you incorrect scripts and scripts with warnings. You can click the error and immediately go to the script and the line. 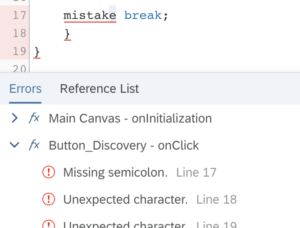 The Reference List shows you all the scripts where the selected object is used in. 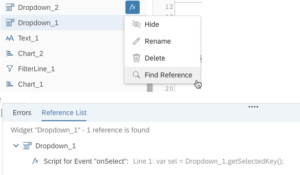 Just as in SAC stories you can use the R Visualization widget in Application Design. Very interesting is the fact that you cannot only use this to visualize a custom R chart, but you can also use the variables that you define in the R script editor in your Application Design scripts. You could for example use R to do some advanced calculations, and display the result through another widget. 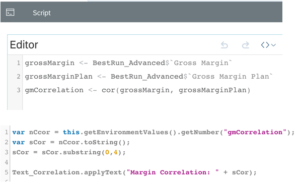 5. Get the largest monitor you can

Make sure you got a large monitor when you want to properly work with this tool. I was using my 13″ MacBook Pro, but with these massive panels on all sides there isn’t much space left for the actual application canvas and you don’t want to be scrolling and opening/closing panels all the time. 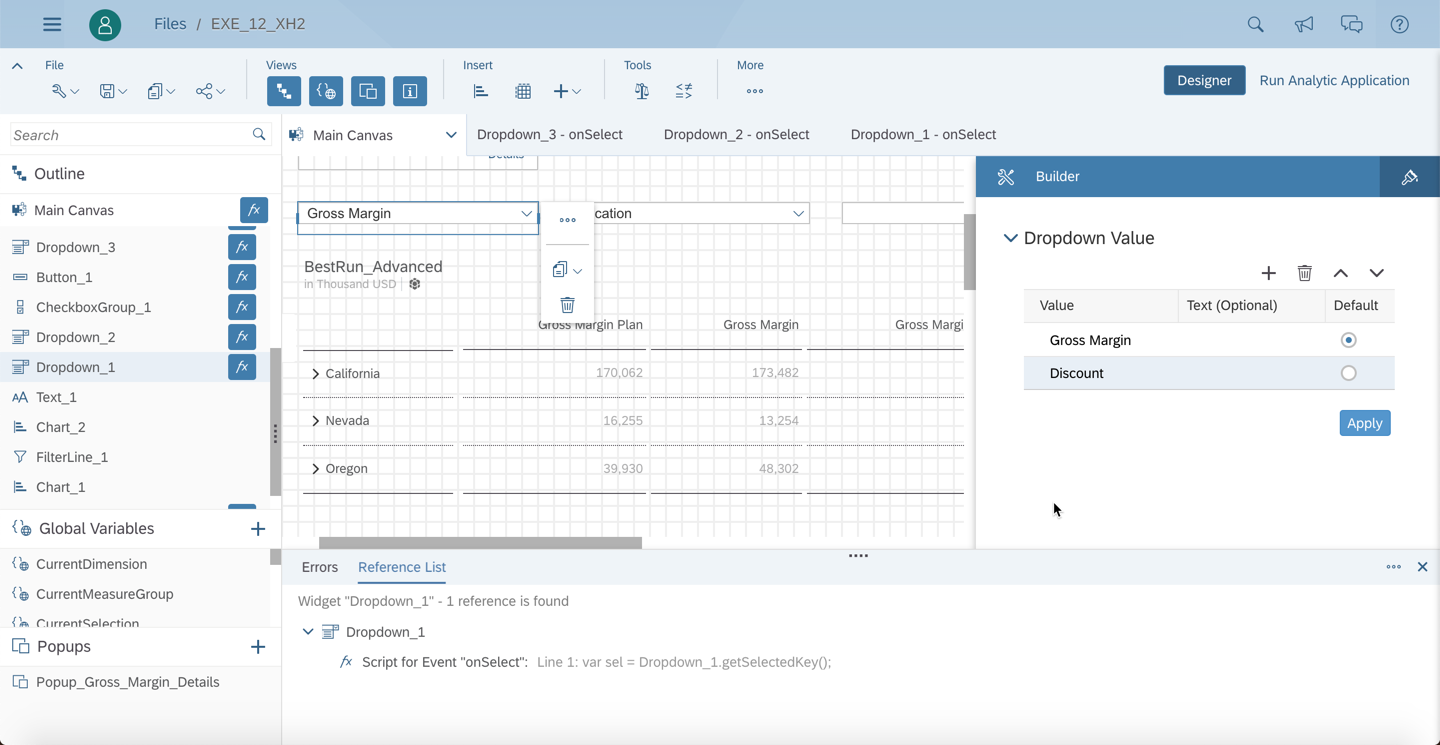 Last week was the SAPinsider BI2017 event in Amsterdam, which we visited with a team from Interdobs. I’ve seen some very cool demos on especially SAP Analytics Cloud, some Design Studio 1.x and Lumira 1.x customer use cases, Roambi and BI Platform administration tooling. Unfortunately the state of SAP Analytics Hub was exactly as what I already figured out from the slides a few weeks ago, but at least I was able to see a live demo and talk a bit to the developers.

The first two days didn’t bring that much new information for me, luckily Friday was stacked with sessions showing a lot (live) demos so that made up a lot. Less slides = more value.

Overall I think the event was very mediocre, not much new stuff, only a few deep-dive hardcore tech sessions (BI Platform Support Tool FTW!), only one hands-on tool session (Lumira Discovery), too many breaks, terrible food (except for the fruit) and Pepsi Coke.

We made some videos to recap day 1 and 2, and on the third day we recorded De Nederlandse BI Podcast episode 27.

In BW hierarchies, the values that are not assigned to a hierarchy node are gathered under the Not Assigned node. The query output shows this node in the hierarchy on the same level as the top node of the hierarchy. This works the same for all SAP front-end tools that support hierarchies (Design Studio, Analysis for Office, BEx Analyzer, BEx Web Analyzer).

So far so good. Last week I ran into an issue with filtering on these Not Assigned nodes in Design Studio. The option just isn’t available! The whole hierarchy is visible in the filter menu, expect for the Not Assigned node! This happens both in prompt filters and the normal filters via a component (i.e. Dimension Filter or filtering via context-menu on Crosstab). Display and filter in Design Studio:

We are currently in the very final stages of editing the second edition of the SAP BusinessObjects Dashboards 4.1 Cookbook. We expect the book to be available in an eBook and paper edition in just a few weeks from now (April 2015).

For this updated version of the cookbook we broadened the scope a bit for the beginning SAP BusinessObjects Dashboards developer as well for the more experienced user. We will for example provide some more introduction to the SAP BusinessObjects Dashboards tool itself before diving into the practical step-by-step recipes right from the start. For the more seasoned users we added chapters about dashboard performance tuning and development productivity, plus a bunch of new tips & tricks throughout the book.

Of course we also added a lot of new recipes to feature the new 4.1 features and include more tips & tricks. We discuss all the new components, the new mobile dashboards concept and the new connectivity options, complemented with new chapters on performance tuning and development productivity. At the end of the book the other dashboarding solution by SAP (Design Studio) is introduced.

With 100 recipes and 470 pages of content (almost 150 pages more than the first edition) this will be thé ultimate and definite guide for SAP BusinessObjects Dashboards 4.1 developers!